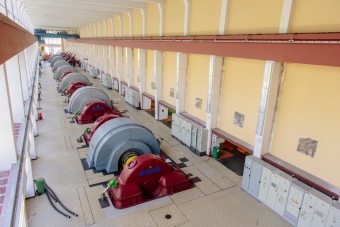 On May 12th HPP Perućica marked 59 years of its existence and successful operation. First electricity volumes were delivered to the Montenegrin electric power system in 1960, and since the beginning of operation, our oldest large power plant has generated the total of 50.894.895 MWh. The year of 2010 was the record year, when HPP Perućica generated and supplied to the electric power system of Montenegro 1.434.895 MWh.

In the following period, before the management and the employees of HPP "Perućica", as well as the management of the Directorate for Development and Engineering EPCG, it is an extensive and extremely demanding job of revitalizing equipment, as well as creating conditions for expanding production capacities.

Soon will be sign a new loan arrangement with KfW bank and the start of reconstruction and modernization of HPP "Perucica", worth EUR 33 million, and by the end of 2020, negotiations should begin on the arrangement for the installation of the eighth aggregate of 58.5 MW and the total value 23 million EUR.

HPP Perućica is situated in the northern part of Bjelopavlićka valley. It got its name after the spring of Perućica, which originates in its immediate vicinity. In order to generate electricity HPP Perućica utilizes water of the upper watercourse of Zeta River, i.e. water which runs its turbines from Nikšićko field at extremely favourable head on short distance. Reservoirs Krupac and Slano and Vrtac retention tank, having an installed capacity of 307 MW, are included in the system of HPP Perućica, and five small hydro-power plants constitute part of the system of HPP Perućica, which are located in Podgorica, Kolašin, Cetinje and Šavnik, with annual generation of near 6.000 MWh.