“Solari 3,000+ and 500+ Project” Presented to the Committee on Energy and Mining 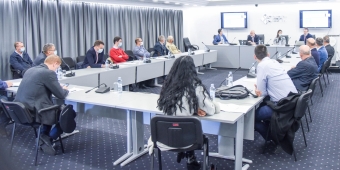 “Solari 3,000+ and 500+ Project” and technical conditions for connection of plants that operate on the basis of electricity generation principle for own requirements, installed capacity not exceeding 30 KW, were presented during the meeting of the Committee on Energy and Mining of the Chamber of Commerce of Montenegro held on November 19 2021, as well as implementation of a dual education in Montenegro higher education as part of DUALMON Project.

The meeting was chaired by Ranko Vukmirović, Secretary General of the Committee on Energy and Mining, participated by representatives of Elektroprivreda Crne Gore – Bojan Đordan, Solari Project Manager and Executive Officer of EPCG FU Generation and Rajko Jaredić, Manager of the Sales Department in FU Supply, Anja Čanović, Engineer in the Department for Non-Standard Connections and Distributed Sources in Crnogorski elektrodistributivni sistem (CEDIS), Ranko Vuksanović, Director of EPCG-Solar-gradnja and Sandra Perić, Adviser at the Project Department, Chamber of Economy of Montenegro.

Bojan Đordan (EPCG), said that Elektroprivreda Crne Gore started implementation of this project in cooperation with the Eco Fund, which is the first important step during energy transition process.

Mr Đordan said that EPCG will enable repayment in instalments for participants in this project, with the instalment amounting to the ongoing average electricity bill of the concerned customer, repayment term for the segment 500+ from four to six years. Subsidy amounting to 20% will be provided by the ECO Fund and the overall logistical and administration support by Elektroprivreda Crne Gore.

- This is going to be very profitable given that Elektroprivreda provides overall logistical support, particularly if having in mind that, upon repayment of the system, the customer can secure free electricity for their own needs at least within next ten years. Also, it will be possible to return actual energy surplus to the distribution grid and sell it to EPCG, in compliance with the applicable regulations of Montenegro, said Mr Đordan.

He also mentioned that the missing energy quantity will be taken from the grid under the same conditions, which will make it possible for the user and buyer of a PV system to become the generator. This will significantly relieve household expenses or the company budget, providing it is about the system installed in some business facility or minor plant.

Mr Đordan presented major steps in the implementation of this project: registration of customers, site visit, development of preliminary documents (technical and economic analysis) and obtaining necessary permits and approvals, works execution and conclusion of the contract on works execution, as well as development and review of the main design.

- Montenegro has an enormous energy potential, which is why we want this project to elaborate to the citizens a whole story about energy transition as well as generation of electricity from renewable energy sources, thus reaching the customer themselves so that they can understand their role in this process and meet their energy requirements, said Mr Đordan.

At the conclusion, Mr Đordan invited all legal and physical entities that meet conditions to participate in Solari Project to apply for the Public Tender and become aware of all the benefits generated by the system such as this one.

Anja Čanović, Engineer in the Department for Non-Standard Connections and Distributed Sources in Crnogorski elektrodistributivni system, presented technical conditions for connection of plants that operate on the basis of electricity generation for one’s own energy requirements, plant’s installed capacity not exceeding 30 kW.

She said that distributed electricity output has been increasingly attractive for electricity consumers, so that end consumers transit from the passive role of a consumer to the active role, which enables them to manage their consumption profile using new technologies.

- The new category of distribution system users is created in this way, and that category is buyers-generators. It is particularly important that consumers can save their money by generating electricity for their own requirements, while unconsumed electricity surplus is fed into the grid; on the other side, their own consumption can be useful while reducing consumption losses because electricity is generated and consumed locally, said Mrs Čanović.

She also mentioned technical conditions for connection of small plants to the distribution grid, stating that applicable regulations must be obeyed during connection, as well as the Distribution Grid Code and the technical recommendation governing this area, made by the distribution system operator.

According to her opinion, if the buyer-generator plans to connect small plant (installed capacity not exceeding 10 kW) to the existing facility, it is necessary to take all steps envisaged by the procedure of connection and submission of documents required by CEDIS; in case all the necessary information and documents are submitted, the connection agreement is signed.

Mrs Čanović said that, according to the ongoing research about renewable energy sources, it can be concluded that Montenegro has great resources providing favorable possibilities for their energy utilization, stating that there are 14 plants currently in Montenegro, including one hydro power plant, which are connected to the low-voltage distribution grid, based on the principle of generating energy for one’s own requirements, the total installed capacity 462.5 kW.

She finally emphasized that over last couple of years there has been high interest in construction of solar plants and that, so far, CEDIS has issued more than 20 permits for connection and the implementation thereof is expected to take place by the end of next year.

- The objective of this project is to provide support to various requirements and interests of university students, companies and universities in the country, and to provide recommendations for implementation of dual education throughout Montenegro, said Mrs Perić.

She said that the project consortium consists of twelve partners from four countries: Montenegro, Serbia, Slovenia and Austria, with universities, state educational institutions and companies included, ready to participate in the pilot programme on introduction of dual education.

- The role of the Chamber of Economy in this project is to provide support to all project activities, especially while recruiting business entities, identifying their requirements based on the analysis of a questionnaire, arranging events related to dual education, active participation in creation of generic model of dual education, providing recommendations to amend legislation based on the analysis of answers received from entrepreneurs, including all other project activities which require the Chamber of Economy to get involved, said Mrs Perić.

Finally, she pointed out that it is extremely important for such initiatives to originate from business entities, because students are educated to be able to work and it is in the interest of all entrepreneurs to employ the best staff.