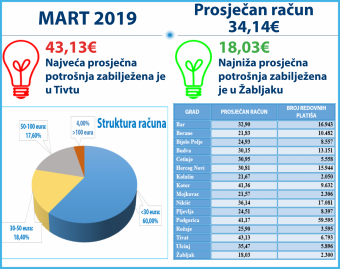 The average March electricity bill for households, at the level of Montenegro, amounts to €34,14 (excluding non-read metering points in facilities that are not permanently inhabited). Households in Žabljak have recorded the lowest average consumption of €18.03, and the highest consumption in the preceding month has been registered in Tivat – households have consumed €43,13 on average.

March bills reduced by the amount of discount for regular payers will be received even by 53.6% of households in Montenegro, or 188.280 customers.