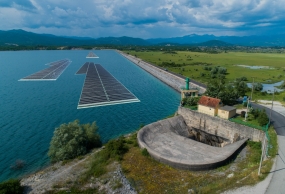 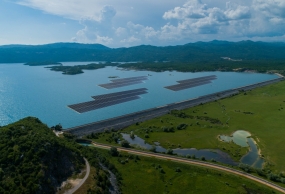 Given that we are committed to essentially investing into green energy development, our plan in Elektroprivreda Crne Gore (EPCG) is to construct floating solar power plant on Slano Lake in Nikšić, in cooperation with our credible partners.

Slano Lake is an artificial reservoir located in the western part of the Nikšićko field, built in the middle of last century for the needs of the hydro-power system ‘Perućica’. It covers an area of 8.89 km2. It reaches up to 4.4 km long and 18 meters deep.

‘It is exactly this lake which offers great opportunities for the solar green energy development, having in mind that Montenegro, the country covering a small area and having specific geographic configuration, has no vast space suitable for installation of solar panels. Also, Slano Lake itself, unlike Krupac Lake, has not been acknowledged as a tourist attraction of the municipality Nikšić. In addition, it should be taken into consideration that construction of floating solar panels on this lake would not entail property disputes because it is owned by our company’, said Nikola Rovčanin, the Chief Executive Officer of Elektroprivreda Crne Gore.

Mr Rovčanin has stated that the project on construction of floating solar power plant on Slano Lake would be harmonized wih the Guidelines for mitigating adverse impact of renewable energy sources onto biodiversity, published by the International Union for Conservation of Nature (IUCN).

‘Ultimately, such move would be compliant with the fundamental determination of Elektroprivreda Crne Gore, which determination, aimed at investing into green energy development, is unquestionable. ‘We are sure that this project as well as the similar ones will bring multitude of benefits both to modernization of our Company’s generating capacities, as well as to the energy stability of the entire country, with the implicit devotion to the environmental quality care’, concluded Mr Rovčanin.

The companies from Denmark have expressed the interest for construction of floating solar power plant at Slano Lake.

‘This is particularly valuable information if we bear in mind the fact that it has been long that this country, exactly due to quality operation of its companies from the civil and energy sector, confirmed its capability to develop green energy in an economically efficient and people and environment-friendly manner’, Mr. Rovčanin explained.

Floating solar power plants are relatively new phenomenon. Numerous studies confirm that they are 12,5% more efficient than solar power plants on roofs and land, considering that sunbeams reflection on solar panels placed on water surfaces is pretty higher compared with those located on the land. Currently, the biggest European floating solar power plant is situated in the city of Piolenco, near Avignon in France. It has about 47000 solar panels, with the power of 17 MW, and it is estimated that it supplies almost 5000 households at the annual level.  At the same time, it reduces reduction of carbon-dioxide for more than 1000 tons. Floating solar power plants of giant dimensions are being largely constructed in Asia, particularly in China, India, Japan and South Korea. When it comes to the Balkans, it should be mentioned that floating solar power plant has been constructed in Albania, at Vau and Dejes reservoirs and necessary funds amounting to 9,1 million euros have been provided from loan of the European Bank for Reconstruction and Development (EBRD).