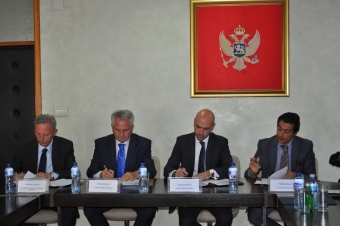 “Montenegro will, by laying the undersea power cable, become an energy junction point in terms of infrastructure while setting up of its own Exchange implies electricity trading in Montenegro under more transparent and quality conditions.  Furthermore, it means that each energy undertaking will be provided the same electricity trading conditions while on the other hand, regarding customers, competitive market implies creation of conditions for potential reduction in electricity price.“, said Minister Sekulić .

The obligation to establish electricity exchange arose from our membership in the Energy Community and is also envisaged under the process of our accession to the European Union, reminded Ms Sekulić.

„In the process of the Western Balkans interconnecting our obligation was to either create or join some other exchange. We decided to establish our own electricity exchange and accordingly three energy undertakings in Montenegro have signed today documents establishing officially the electricity exchange, said the Minister of Economy, Ms Sekulić. She also added that the Exchange provides the opportunity to all Montenegrin and regional energy undertakings, having surpluses or shortfalls in electricity, to sell electricity via our established Electricity Exchange Company.

Mr Ivan Bulatović, Chief Executive Officer of CGES, said that signing of Memorandum of Association and Articles of Association of the Electricity Exchange Company in Montenegro put us in a position of getting closer to establishing the regional electricity market.

Mr Bulatović said: “The establishing of Exchange is extremely important given that in the future, energy undertakings as well as Montenegrin customers, will be able to trade with electricity in the same way they trade with other goods, encouraging competition and transparency of the overall process. It will also impact setting up of the electricity price.

Mr Tonino Maglio, Chief Executive Officer of EPCG, said that EPCG as well as Transmission and Distribution Electricity System Operators will, by establishment of Electricity Exchange, enlarge their portfolios, given that all the mentioned energy undertakings will be enabled to purchase electricity needed to cover a portion of losses in their systems. Suppliers and direct customers from the country and region will be provided the same opportunity as well.

“One of the objectives of the Exchange is cooperation with the regional energy undertakings. Creation of the efficient and solvent wholesale market represents precondition for creation of competitive retail market which implies that final customer will consequently benefit from opening of electricity exchange”, said Maglio.

Mr Milan Radović, Chief Executive Officer of COTEE, said that all conditions for energy operations outside the borders of Montenegro were met by establishment of the Electricity Exchange.

According to his words, we allegedly met all the important conditions to be represented in Europe i.e. to become a part of the European Energy System through both the undersea cable and trading connections.

“Today is a great day for Montenegro given that the energy sector is a basis for economic stability and development of Montenegro.” Radović concluded.

Upon signing of Memorandum of Association of the Electricity Exchange Company by three energy undertakings the next step is to register the Company with the CRCE and thereupon the Company shall appoint the Chief Executive Officer at the first session of the Board of Directors.