ĐUKANOVIĆ: CHARGES MADE BY KRIVOKAPIĆ ARE POINTLESS 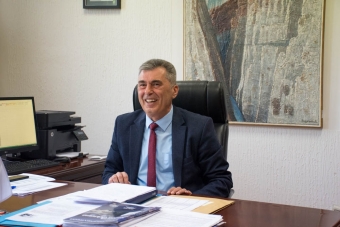 THE RESPONSE MADE BY MILUTIN ĐUKANOVIĆ, THE CHAIRMAN OF EPCG BOARD OF DIRECTORS, CONCERNING YESTERDAY'S STATEMENT MADE BY ZDRAVKO KRIVOKAPIĆ, THE PRIME MINISTER, ABOUT THE ALLEGED SALE OF EPCG

Given that I have read in last few columns written by Željko Ivanović, which columns abound with immense nonsense, that the meeting I had in Belgrade with Mr Selaković, the Minister of Foreign Affairs of Serbia, served the purpose of selling Elektroprivreda, I didn’t consider it necessary to make myself specially heard, because I thought that such idiotic observations could not affect brain of a normal person; however, I think that such observations speak enough about brain of a crane who has made them.

This is why such writing, containing idiotic observations, speaks enough about bad intentions and calculated discreditation of basic business procedures as well as of me, in my capacity of the chairman of EPCG Board of Directors. The answer is very simple - Milutin Đukanović, even if he wanted, which he actually does not, has no legal authority to do this. Even if all the seven memebers of EPCG Board of Directors would be for the sale of Elektroprivreda, it would be as legally based and as important as if we had decided to sell Manchester United or Real Madrid.

Elektroprivreda can be sold only by the Shareholders’ Meeting, i.e. the Government, with the approval of Montenegro’s Parliament, given that the Government owns more than 98% of EPCG.

This reply would be more than sufficient for the public, as well as for ‘Vijesti’ daily newspaper and Željko Ivanović.

However, the last night’s performance of Zdravko Krivokapić and his confirmation and awkward elaboration of the views of Željko Ivanović make the situation more serious, because Krivokapić performs the function of a Prime Minister.

It remains unclear who was involved in preparation of the sale of Elektroprivreda, and what kind of involvment that was. What is the role of Mladen Bojanić, the Minister, who proposed to the Government to have one Board of Directors, and Krivokapić changed the composition of such Board of Directors so as to show him who is in charge and who is the one without whom nothing can be done with ‘the golden goose’.

The depth of the confusion is backed by the following plausible issues.

Zdravko’s unjustified worry and resentment caused by the meeting with the ministers of the Government of Serbia, two months after the appointment, speaks volumes about his enchantment with Željko Ivanović as well as about the intent to give sense to Željko’s senseless observations.

To think that those encounters could have included discussions about the sale of EPCG is too much of an innuendo even for the most gullible ones, not to mention the man who is a Prime Minister. I am a serious man and I feel sorry that I must, due to such public accusations of the Prime Minister Krivokapić, clarify basic issues and put him in an uncomfortable position. I fear that people might conclude that the Prime Minister is not too savvy about his job.

Instead of being proud of the fact that state officers from Montenegro, a chairman of a board of directors at that, are received in a such high-level, evidently as an expression of a readiness for cooperation aimed at development of the energy sector, as one of the most important sectors for the overall economic development of the region, the Prime Minister acts as a player whose ball has been taken and that is the reason why the game cannot be played.

Let me reiterate a generally known fact; Article 29 of the Law on State Property prescribes that ” the Parliament of Montenegro, at the proposal of the Government, shall decide on disposition of objects and other goods owned by the state, the value whereof exceeds €150,000,000”. There are dozens of other regulations and acts preventing the ludicrous innuendo that a board of directors, thus that of EPCG, could sell the company that they were appointed to manage temporarily.

Undoubtedly, Zdravko Krivokapić does not know this, because had he known, he would have refrained from publicly risking to compromise himself.

He attacks me with senseless statements, given that he is accusing me of wanting to do something that cannot be done!

I know one thing, the truth always wins, and I am telling the truth.