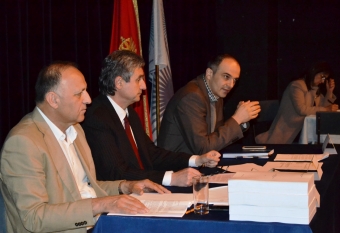 XIII extraordinary Shareholders' Meeting of EPCG A.D. - Nikšić has been held today in Nikšić. Based on the agenda defined in advance for the Shareholders' Meeting chaired by Ranko Vojinović, the executive officer of the Human Resources Directorate, the following decisions have been passed: Decision on readiness to issue corporate guarantee of EPCG AD – Nikšić to the benefit of the Financier of the Project for Construction of the Unit II of TPP 'Pljevlja' and the Decision on release from duty and appointment of the members of the Board of Directors.

The Shareholders' Meeting has confirmed that the Company is ready to issue irrevocable and unconditional corporate guarantee in the full amount and for the total period of financing the project for construction of the Unit II of TPP 'Pljevlja', which corporate guarantee is to be issued to the benefit of the Project Financier, i.e. the Czech Export Bank, the Export Guarantee and Insurance Corporation and the Commercial Bank and/or other bank or financial institution to be selected to finance the Project.

The corporate guarantee shall be enforceable if the final transaction documents are negotiated between the Company and the Financier and the final investment decision about the approval and implementation of the Project is adopted by the Shareholders' Meeting. In the meantime, the new Shareholders' Agreement needs to be signed and enforced by the State of Montenegro and A2A. The Shareholders' Meeting has empowered the Project Working Team and the Company's management to agree upon parameters of the loan arrangement and the Company's shareholders will express their opinion thereof following the approval of the Board of Directors.

Shareholders’ Meeting has previously been informed that the Board of Directors, at the proposal of the management, passed the decision on withdrawal from the agenda of decisions regarding incorporation of the Limited Liability Company ‘Crnogorski elektrodistributivni sistem Podgorica’ – CEDIS. The Company’s management will within the shortest period, together with the Steering Committee, eliminate formal shortcomings from the documents and submit the mentioned documents to the Company’s Board of Directors and Shareholders’ Meeting for final defining and adoption.

According to the Statute of EPCG and Rules of Procedure, Shareholders’ Meeting has released from duty the previous and appointed new members of the Board of Directors in the following constitution: Srđan Kovačević, Ranko Milović, Miodrag Čanović, Kenan Hrapović, Andrea Crenna, Francesco Becchelli and Oreste Bramanti.